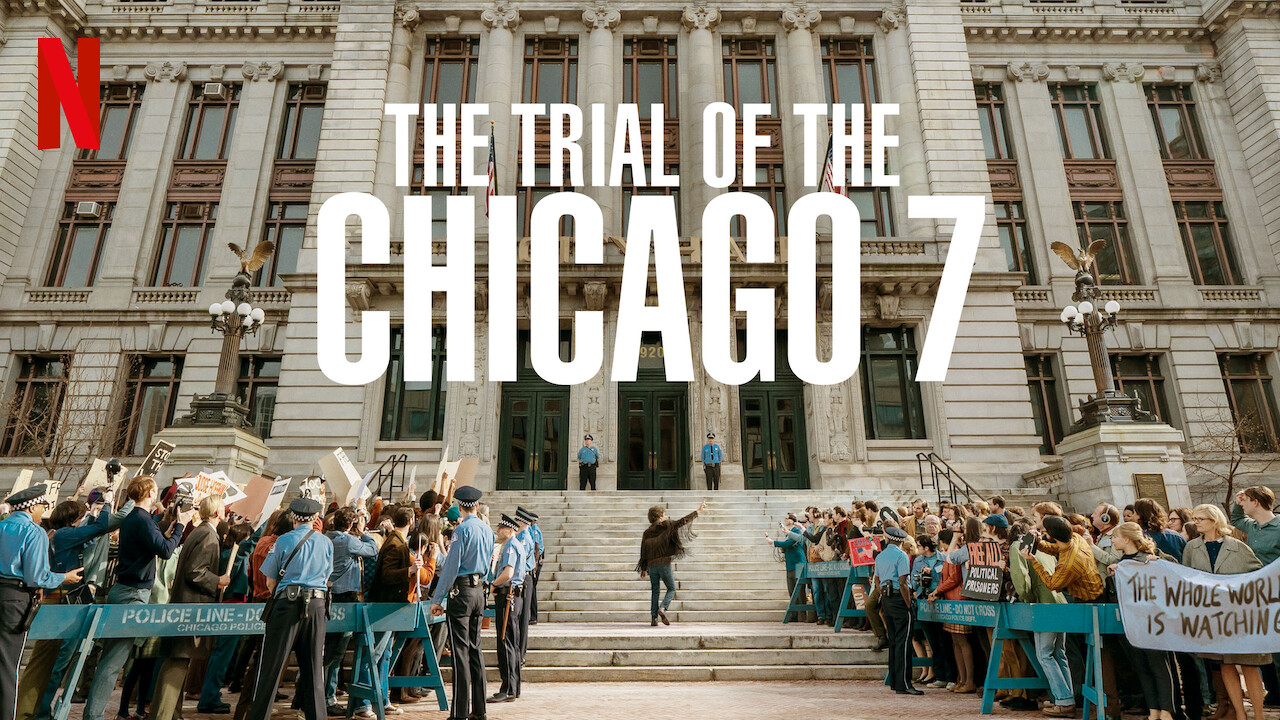 As cinematic fridays go, Netflix outdid itself this week. Based on a true story, ‘The Trial of the Chicago 7’ finally released on OTT after briefly being screened in select theatres since 25th September. In 1969-70, eight Vietnam-war protestors were charged with draconian Southern laws, which led them to be tagged together as the Chicago Seven. This film, which is the brain-child of none other than Aaron Sorkin, takes us through an eerie but realistic sneak peek into a political trial.

“There are civil trials, and there are criminal trials. There is no such thing as a political trial.”

In the 60s, the men who made for what came to be known as the Chicago Seven were men across state borders who had one simple mission – to unite the people who stood against what the American government at the time was doing, so that they could peacefully protest it. The Vietnam war had already caused a lot of bloodshed on both sides. The counterculture movements of the late ‘60s gained momentum as the faith of the people in war took a deep dive. People were willing to congregate in tens-of-thousands, opposing the State’s inability to empathize with their disgust.

Freedom of speech and peaceful assembly is an interesting right. Being a constitutional right under the American First Amendment, a citizen cannot be questioned on what he says, or be sent to jail for it. Defamation aside, the State, or the public functions and citizens it ought to represent at large, does not have a right against you, or so it seemed.

“If America’s soul becomes totally poisoned, part of the autopsy must read “Vietnam”.”

When it came to war, women or slavery, certain nations have failed to repeal orthodox laws that no longer represent the present. This is a cyclical truth that has always failed the test of time. Courtrooms see blasts from the past to the complete shock of the people. The Chicago Seven was one such case, or should I say seven? A collective trial for seven men, including David Dellinger (John Carroll Lynch), Abbie Hoffman (Sacha Baron Cohen), Jerry Rubin (Jeremy Strong), Tom Hayden (Eddie Redmayne) and Bobby Seale (Yahya Abdul-Mateen II), attempted to indict them for conspiracy to incite a riot.

Very early in the film, a conversation between then-Attorney General John N. Mitchell (John Doman) and public prosecutor Richard Schultz (Joseph Gordon-Levitt) reaffirms common knowledge regarding Nixon’s presidency. While Richard was hesitant to take up the case, he was just another foot soldier of his government and could not wash his hands off his duties.

“This seems to really bother some frat brothers who come to town in the spirit of fraternity.”

Sorkin has done an impeccable job of highlighting what makes for an aggressive trial. When the defense refuses to back down, it is usually either because the accused is very rich or the issue in court is worth backing for its sheer gravity. Here, Attorney Kuntsler (Mark Rylance) remarkably defends persons grouped in the Chicago Seven. The manner in which he flips the table onto the police is, if as true as the film, an allegiance to true honor.

Police brutality is an issue that has led America to a place where it is comfortable with demanding that the police be defunded. Such serious claims against the State are usually seen where nations are considered to be ‘failed states’. The film does an exceptional job at making you wonder where the floor-bed for liberty lies, and at what stage does a thriving and popular economy stand as nothing more than a façade.

“The whole world is watching.”

It’s jarring but insightful to see the kind of true crime television we see today. We now know about what happened at the 1968 Democratic Convention in graphic detail. It’s more than difficult to circumvent the sheer transparency that social media, television and news bring today. Perhaps this inspires creators and writers like Sorkin to reignite what once was just a confusing creative spark with Spielberg in 2006, and I’m grateful for it. Informative, vivid and heart-wrenching, the film conveys systemic realities in a way that, one can only wish, Court judgments have the liberty to too.

The Trial of The Chicago 7 Trailer Review

Do let us know your thoughts on “The Trial of Chicago 7” review.

Check Out Our Latest Review on Bad Boys Billionaire: India.