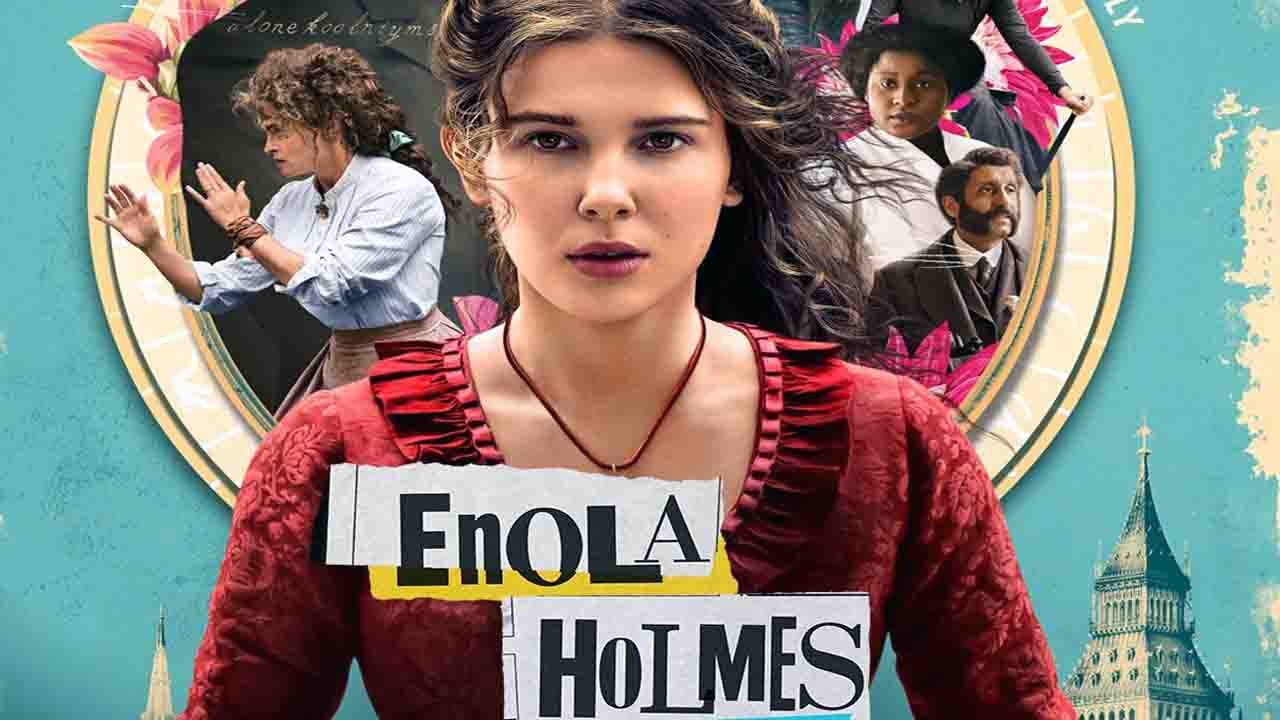 Yesterday, Netflix gave viewers ‘Enola Holmes’. Portrayed by none other than Stranger Things star Millie Bobbie Brown, ‘Enola Holmes’ is the famous Sherlock Holmes’ (Henry Cavill) and Mycroft’s (Sam Claflin) 16-year-old baby sister. The stories surrounding the lives of the Holmes brothers, first written by Sir Arthur Conan Doyle, have yet again been adapted to tell us a novel tale on empowerment in 1880s England.

So then it was just the two of us, and it was wonderful.

The film ascribes an unabashed and unorthodox romanticism to a mother-child relationship. Eudoria (Helena Bonham Carter) is the mother of the three Holmes siblings. While the two boys are now grown men in London, Eudoria has been raising Enola by herself since her husband died. They share an intimate bond, redefining norms expected from women in the 1880s.

With a montage of scenes that celebrate vigor and freedom, the movie depicts wondrous ideas on parenting, training and human expansion. Often, supporting characters tell fables of Eudoria’s perspective on the world and her children. Eudoria is an enigma, and unsurprisingly, the silent anchor for this script. Snippets of Eudoria make for my favorite flashback of a Fight Club-esque aesthetic, which in my view is the best way to watch Helena Bonham Carter.

We need to break her and build her up.

Very early in the film, we are reintroduced to our favorite brothers. While a new side to Mycroft is portrayed, in truth his character curve is average at best. He recommends that all be done that must be done to shape his sister into the lady she needs to become. This rather complex and controlling view is forced to be tested by Enola’s wit and talent. Yes, this time Sherlock isn’t the one pit against Mycroft.

The movie highlights a very different facet of the relationship the brothers share, while maintaining their well-known inability to understand each other. Interestingly, this side of Mycroft while known to viewers feels new. It takes a deep dive into the child-core that adult scripts would otherwise avoid delving into.

Look for what’s there, not what you want to be there. You’ll see the truth soon enough.

While Enola knows Sherlock as family tends to, they rely on memories from a different time to form an image of each other. Enola was raised to be an industrious problem solver, while Sherlock is known for the same. The striking similarities in their nature make for a cinematic expression of a brother-sister bond. When Sherlock comments on Enola’s actions, he attempts to teach, but smiles in recognition of his incapacity.

The scenes where they share the screen are often heartwarming snapshots of sweet familial humor and wisdom – the kinds shared with those you understand innately. While I don’t think Cavill portrays the quirkiness often associated with Sherlock, the shift in character serves this script well, avoiding unnecessary focus to a supporting character here.

Historical perspective is the only way to begin a day.

In search of her own path, Enola is trying to make the best choices, like anyone of us. The writers do a magnificent job of detailing what makes for feminist practices. Enola is not a lady, as would be expected from a family of her stature. Neither could she be called uneducated or illiterate. She possesses a grace that isn’t defined by norms of men, but a grace that honors herself.

She does so by gaining as much perspective as she can in the world that surrounds her and surprising all. This side of Elona is what strikes viewers most, in a way that is the kind of Alt-Disney tale that warms the modern viewer. While she possesses unique skills and has pastimes that most would call boisterous, she is from a very different, almost unnatural league of lovely.

It is good to care for the vulnerable but not if it means risking your life.

Enola’s versatile hobbies take the audience on a twisted journey that almost feels like an interactive game. Speaking to the audience, this fast-paced and visually immersive experience feels wholesome. We are made to juggle with many a villain or hero at once. While each story may feel predictable, there is a lively punch to the plot every few minutes. Different mysteries are interlinked like a well-woven net, entangling the most unrelated crimes. With ciphers, clues and corsets, it becomes impossible to keep Enola away from them, as the story does us.

My life is my own and the future is up to us.

While I have given you a fair idea of the experience this movie evokes, I must award appreciation to the acting, editing and writing for this movie. Nobody expects much from an American version of classics like Holmes, but ‘Enola Holmes’ comes very close to good. I would attribute this to the easy sell a perfect narrative of young & healthy liberty makes for.

The plot itself may not be very memorable, but each character oscillates between an emotionally charged display of affection or skill. While fairly serious, it may still irritate fans of Sherlock Holmes. Conversely, it may feel like a vacation where one gets to see a baby sister grow up, with pride filling your heart.

Let us know what you think of Enola Holmes Movie Review in the comments below.

Check out our latest movie review on ‘The Devil All The Time’.