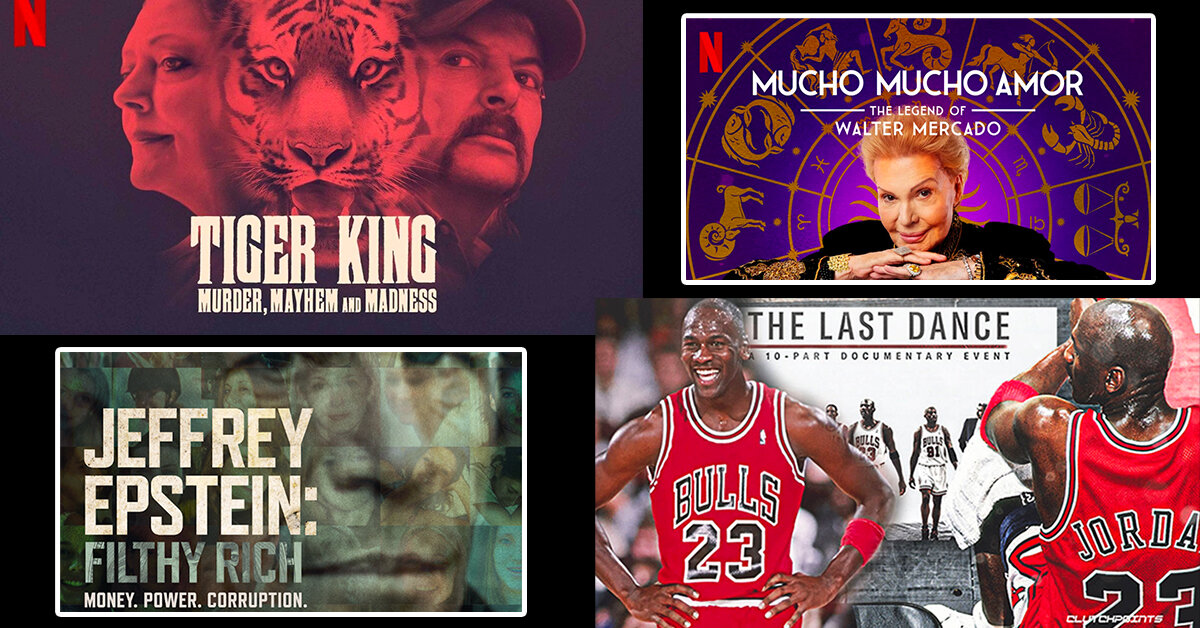 In this post, I analyze four biographical documentaries or docuseries’ from 2020 that portray intriguing male personalities. They are either known for their authenticity, skill, bravado, flamboyance, or crimes. Who are the True Alphas here?

The National Basketball Association (NBA)’s biggest asset for decades, Michael Jordan is a world-renowned personality. ‘The Last Dance’ documentary explores MJ’s seething vigor, melding footage from the Chicago Bulls’ 1997-98 season and 90 interviews that better-described his persona. Hearing him, his family, co-players, and coach (Phil Jackson) talk about his best days strikes every chord that weaves songs of ambition. MJ was relentless in his pursuit of victory.

A beautifully woven montage of every personality trait that built him to be the man he became; this series deserves applause. It also identifies the ancillary success of grateful & ungrateful men, whose bread & butter seemed to solely depend on Jordan’s athletic prowess. While Krause’s controversial views highlight the stupefying notoriety of fanciful corporate America, co-players express genuine complications borne from playing in his shadow.

This series best describes the often-arising necessity to humble one’s ego for team dynamics. Must one follow suit when you’re not the winning player of your team? How far must one go to recognize & work with true genius?

Widely acclaimed as incorrigible, Jeffrey Epstein has now earned the infamy of being much more than a convicted sex offender. This 4 -episode series explores the crimes of Epstein through published news, and interviews of survivors & members of the Police. Based on the 2016 book written by James Patterson, this miniseries is a harsh and much-needed reminder of the veracity of a now-evidenced trafficking culture plaguing a certain sect of high-level corporate America.

Having financial control over the lives of hundreds of innocent girls, the story is a stark warning of the danger self-serving enterprises pose if their object merely indulges men of uncontrollable power. Taking us through documentation of claims in court against Epstein, this docuseries provides evidence of the inexcusable control exerted over minors and the greed to abuse one’s ease-of-access.

Infamous for his passion for keeping tigers as pets, Exotic is caught up in all kinds of murder, mayhem, and madness. Not as intelligent as the first two shows on this list, this documentary follows the life of zookeeper – Joe Exotic.

His pride is questionably unapologetic but too bizarre to gather a laugh. It brings to light true crimes that are not just shocking, but incomprehensively amusing. Showcasing footage taken by of Exotic’s zoo and other intriguing personalities such as Carole Baskin and Doc Antle, the show highlights unbelievable realities and the intentions that garner them. Fanciful habits seem to be an inescapable way of life for the alleged tiger lovers and caretakers who are the subjects of this documentary. Caring for tigers is a real possibility, but at what cost?

My award for the title of ‘True Alpha’ goes to Walter Mercado. This unpopular opinion stems from this man’s unorthodox personality that is out of this world. In the 1960s, this Puerto Rican performance artist became an astrologer and global television sensation. Walter seems to be a nostalgic memory for the Hispanic communities across Puerto Rico, Latin America, and the United States. He is remembered as a glamorous hero who empowered his audiences unconditionally. Focused on positivity, his intentions were daisies well-captured in this touching biographical documentary.

Presenting himself as a boundless soul in service of humanity, he has no recognizable mold. A concoction of the Sage, Magician, and Caregiver Jungian archetypes, with a touch of androgyny and glamour for allure, he was a well-wishing dreamer. Walter reaches the masses as an acclaimed astrologer through an authentic, beloved empire. Once a messiah, always a brand; this show presses the cyclic question – Can love and positivity outweigh greed if running a wellness business? This Androgynous Alpha urges the audiences to remember his three-word mantra for life, “Mucho Mucho Amor”.

What are your thoughts on Alpha traits? Which of these Documentaries showcase the True Alpha Spirit? Let us know in the comments below.

Check Out Our Latest Post:- TOP 5 ASTONISHING MOVIES OF 2020