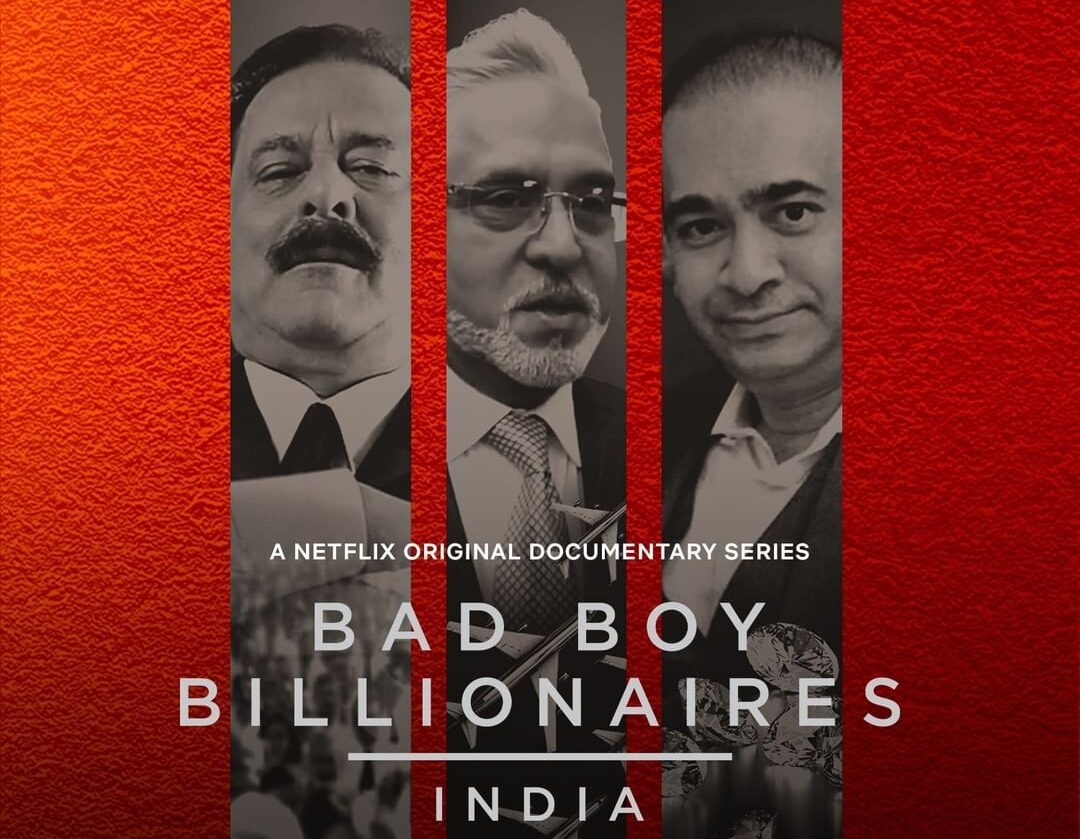 After a long delay, the much-awaited ‘Bad Boy Billionaires’ finally released on Netflix India this Monday. This documentary anthology series aims to showcase the crude realities that built these dreamers. Once known as visionaries, they are now considered as men who unforgettably defrauded the Indian economy of extremely large sums. Originally a 4-part series, the film on Satyam Computer’s Former CEO – Mr. Ramalinga Raju – is still not being allowed to be aired. While no salt need be rubbed onto wounds that are being dealt with by courts, the sheer width and vision of the plans of these three men are bound to solicit public admiration, or outrage.

Son of Bangalore-based industrialist Vittal Mallya, Vijay is the founder of India’s most famous beer company, Kingfisher. Dylan Mohan Grey has done a fantastic job of narrating what made, built and burnt the Mallya empire. The film unravels a lesser-known origin story. Prohibition laws had always affected the Mallya business. While Mr. Vittal found ways to subvert losses as best he could, succumbing to collateral damage, Vijay wasn’t agreeable to the same. A more flamboyant Vijay decided to deploy innovative business thinking to tackle publicizing his brand.

As Grey takes us through Bangalore in the 1980s, we learn a lot about the now-young-Prince-turned-Emperor fighting to fortify his father’s legacy and raise it to new heights. Vijay was a brand himself. His persona bled into the very-red company color he assigned to his new baby – Kingfisher. Kingfisher wasn’t just a brand of beer, but a lifestyle. Through his advertisements and investments, he wanted to remind India that comfortable indulgence isn’t too far away for most of us.

With a show tune that no 90s kid in India could ever forget, Kingfisher became the brand of the people. This is when his eyes grew much wider. The debonair decided to invest in aviation, racing and cricket – all the things he enjoys. As Grey interviews a variety of people who knew Vijay, we learn a lot about what got him to this point where he is now a fugitive awaiting the conclusion of extradition proceedings against him in the United Kingdom. While he once perhaps intended to share his opulent joys with the world, his enterprise unfortunately began sharing nothing more than costly sorrow.

Surat is one of the world’s largest centers for diamond polishing. Nirav Modi came from a Gujarati family in the business of diamonds, with his Uncle – Mehul Choksi – being a giant in the diamond market. After his 10-year-long apprenticeship, he finally decided to give birth to a rather different vision. He started Firestar Diamonds with a vision to build an empire of strength and finesse.

He started a large-scale factory, hiring over 2000 employees. Interviews suggest that many of these workmen were extremely happy with their salaries, perquisites, and the way he interacted with them and took care of their needs.

Ambitious, Nirav felt that Indian diamonds deserve to be seen in a different light. With a modern play of technique and design, he became a leader in the game. Other jewelers simply could not compete as Nirav began building what stylistically competed with the best of the global best. From the visuals we see, it is undeniable that the man has a strong sense of design and wishes to empower tasteful craft.

This made everyone wonder where the resources were coming from. Before the Indian public could recognize this big boy who now owned the fanciest jewelry showrooms in India, we heard about the new laws that were coming in place for fugitive economic offenders. While it may have seemed like a quick-flip to most of us, Nirav had intelligently moved among quieter circles of the very rich for long enough to not be seen by anyone who wasn’t a fashion stalker, and make it worth his while.

We did not notice that Kate Winslet has also worn his designs and Trump Jr. attended the inauguration of his new showroom in New York. The film suggests that the man had a mission and believed that cost was not a factor.

To me, Subrota Roy’s story is the more fascinating one. Unlike the other two, Roy comes from humbler backgrounds. He didn’t inherit a business, but strived to build one. He worked for a struggling company called Sahara Finance, which eventually grew into a chit fund. The chit schemes were far more accessible to rural people as agents would interact with them directly, also getting higher returns for their investment. When the entire village was given the same proposal, and people from the village also began to see returns, it became impossible to resist or question.

Sahara also principled itself on the concept of a family. The idea was that the employees are family and agents who join become extended family. From the film, employees appear diligent in a manner akin to soldiers. It would appear that Roy ran things in a way where he garnered the Pariwar’s respect. They followed his code of ‘collective materialism’, making people work harder – breeding loyalty. The most dangerously heart-warming fact is that he gave many their first pair of shoes.

While an interviewee considered him a man of wisdom – a guru of a higher plane, it is difficult to process what really went wrong. He is the only man of the three who was arrested. He seems to have also been the most vociferous of his innocence among them all. The Supreme Court of India answered an interesting legal question as to how chit funds are to be regulated. By this time, there was a lot more to Roy’s name than the chit fund. He built a luxury city, where he and his employees lived. While he shared with his people, he appeared to have taken too much from others.

It’s interesting to see how all three films depict a large number of people who say that these men were very involved in the micro-processes of their businesses. Nirav Modi and Subrota Roy have been considered an irreplaceable support system for their workforce. After their fall, so to speak, the workforce from humble backgrounds live without it. One wonders if these are cases where the ego begins to overtake altruistic progress, or if the systems themselves are so corrupt that this is just how people do business. Nonetheless, there is no excuse for hungry Bad Boys going for the Billions if the sheer impact of their business pyramid left millions of people distraught.

Do let us know what your thoughts are on the Bad Boy Billionaires: India Documentary Series.

Also Check Out Our Latest Post on Enola Holmes.